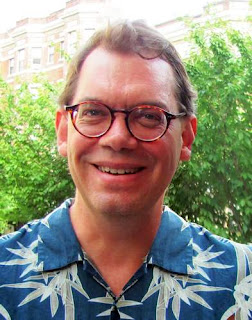 Peter Sims, who contributed two very fine short stories to the Folio Club (“A Painting” and “Estuary” in issues four and five, respectively), was, among many things, a bon vivant. It seems somehow appropriate, then, that when told he had only a few months to live he instead stayed around for thirty-two, to astonish his oncologists, delight his loved ones, and continue to fill his days with as much love, laughter, and voracious reading as possible. His bravery and grace were, characteristically, wrapped in mischievous humor to the end. Having long appreciated Nabokov’s observation that the comic and the cosmic are separated only by the letter s, Peter put that knowledge—and all of the other deep but lightly-carried wisdom he had gleaned through his enormous capacity for life and literature—to excellent use.

He had always cast a wide but distinguished net as a reader. His great favorites, in addition to Nabokov, included Americans (Hawthorne, Emerson, Cheever, Kerouac), Brits (Forster, Woolf, Ford Madox Ford), Russians (Chekhov, Tolstoy, Dostoevsky), and plenty of French (Flaubert, Proust, Camus, and, in the past year, the Nobel laureate Patrick Modiano, of whom Peter declared exuberantly “What a discovery!”), as well as Kazantzakis, Hesse, Kafka, and countless others. It says much about Peter’s appetites that the list, no matter how long, always felt to him like barely a beginning.

A few years back, Peter’s idea—and mine—of a perfect literary lunch was to “sally forth” (his favorite term, always launched with comic gusto: “Roberto! Are you ready to sally forth?”) to share an Indian buffet (the latter word he always deliberately mispronounced as “buff-it” as if we were soon to be buffeted) and enjoy a wide-ranging conversation about books and authors, preferably as a trio with our much-admired, erudite literary-editor friend John Kulka. The three of us had met in the years that we’d all worked together at Yale University Press, a place and an enterprise Peter cherished (and in which I still labor happily on behalf of books by the likes of Proust and Modiano).

Back in 2009, when I decided to create the Folio Club, Peter warned me to think twice. He well knew how much work it would be, and he was right. Still, when I went through with it, he fell in love with the results and became an unwavering supporter, and, eventually, a contributor. His stories were not his only contribution. Unbeknownst to all but me, he also served as the “first reader” for several of my own pieces—because, after all, every editor needs an editor (and wants a good one). Peter’s “first readings” were always first-rate, helping me find those last, elusive quality-control tweaks that could push a story or essay across the finish line before I committed it to print; and, best of all, the process was always an intellectual pleasure for us both.

As a man of many hats (and even more neckties), his literary passions were only one side of his multifaceted spirit. A master gardener; a passionate foodie devoted to cuisines both high and low; an enthusiast of travel, and archaeology; a music lover who reveled equally in classical, jazz, and rock; and a devoted Red Sox fan—his plethora of interests meant he could find common ground with almost anyone he met. And indeed his appetite for friendship and social conviviality was as huge and inclusive as his reading, his immense kindness, and his endlessly delicious sense of humor; so he collected a multitude of friends, not the superficial kind that easily come in bulk but rather the real, deep, familial kind that can rarely be amassed in such quantity. Through him, they—we—also had the privilege of discovering that his wife and sons too are wise, funny, talented, and wonderful.
Once, when corresponding about some of our many enthusiasms for French culture, Peter sent me an email that still makes me smile every time I think of it, an email that is quintessentially him. It read, in its entirety, as follows:

“The French, as you know, are very groovy.”

So was Peter Sims. For the rest of my life I will cherish every moment we shared during the thirteen years of our friendship.

Originally posted on the Folio Club blog on February 11, 2016.