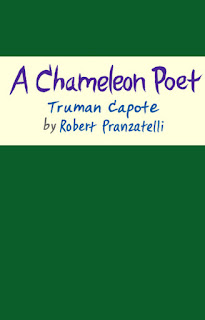 A Chameleon Poet: Truman Capote is a short e-book from Folio Club founding editor Robert Pranzatelli, an essay that takes readers on a tour of the subtle artfulness of a great American writer’s prose style, examining Truman Capote’s famous and famously varied body of work to reveal the hidden dynamics behind its masterful effects.

“A beautifully made essay that opens up a writer I thought I knew . . . A lovely piece.” —Jeff Sharlet, bestselling author of The Family

“A compelling and necessary angle on the always dynamic Capote . . . A very fine essay by a very fine critic.” —William Giraldi, author of the novels Busy Monsters and Hold the Dark

And from the same author... 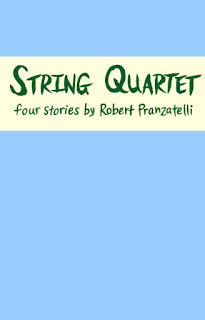 String Quartet: Four Stories is a selection of short stories originally published in the Folio Club literary journal, now brought together for the first time.

Both books are available via all major e-book distributors, including the Apple iBookstore, Amazon (for Kindle), Barnes and Noble (for Nook), Kobo, Lulu.com, and others. 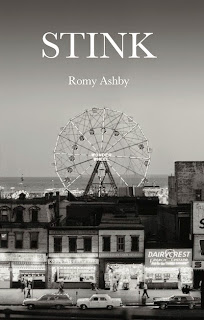 Stink is a wild lark of a novel that its author Romy Ashby calls, aptly, both a time capsule and a curio. Written in the nineteen-nineties but never published until twenty years later, its narrator is Adlai, born as what was then commonly called a hermaphrodite, who sets off into adulthood as a male, to forge an identity in a coastal city teeming with life, mystery, and eccentricity (and teeming, too, with odors of every imaginable kind, in keeping with the novel’s title). Adlai’s gender, however, is only one facet of his identity and almost peripheral to the story, for thanks to his natural curiosity and observational skills he is less interested in himself than in the colorful characters around him. These include, among others, his feisty Uncle Jechiel, an inventor, magician, and poet; his uncle’s favorite verbal sparring partner, Harry, in whose atmospheric shop Adlai learns of the occult arts; several young enthusiasts of the local punk and DIY culture; and Ettie, an elderly lady whose manners and memories hearken back to a jazz-inflected past. As Adlai begins to find a place in both the unusual new community and the strangely shifting realities around him, he stumbles over clues to long-buried secrets entwined with bizarre local mysteries—some of them horrific. Wielding the vivid, sensational palette of a pulp novel and a brush dipped in camp, Romy Ashby has created a brilliantly playful, thoroughly engrossing novel that, like its endearing hero, has an identity all its own.

Chris Stein writes: “Stink starts off with a little dream. On a personal note, I am sort of amazed by the rest of the story’s resemblance to my own dream states and landscapes. Stink is an incantation and exhortation of the love of things gone by, things lost in the alleys of time. Early on we are told that ‘...when they stopped using upholstery in trains and buses...they changed fabric to plastic and people forgot how to love!’ This theme is maintained throughout, but gradually we see that romanticizing the past is perhaps an inevitable side effect of love and magic. And magic abounds here. Today we are absorbed in tech and forget that we still need religion, which in the universe of Stink is indeed magic.”

Debbie Harry writes: “Romy is such a wonderful writer. I hope there will be further episodes, future tales of these curious people from a charmed city in a more magical time for me to sink my teeth into.”

Stink is available direct from the author via her website.

New comments are not allowed.