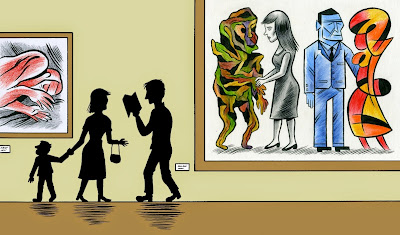 From his small table Zach surveyed the art museum’s café with a satirical eye, a predisposition to see strangers as figures in a cartoonist’s sketch: at a table several steps to his right, two jowly older ladies chatted like bantering bulldogs; an elderly gent, nearby, seated alone, scrutinized the block of lasagna placed before him as if to assess its integrity; a young waitress moved with the unselfconscious quirkiness of a talking animal in a children’s animated film. Lines, of pencil or of ink—imagined, recalled, or reimagined—swiveled in and out of his mental view, yet did not obscure his awareness of the clean white table tops, or of the intersection of the institutional and the humane in this warm busy hive defined by polished metal and glass, the hum of conversations at other tables, the quietly clinking cutlery and plates, the slightly overpriced but attractively presented cuisine (he had made quick and satisfactory work of his own lasagna block), and, not far away, a glass wall and its generous gift of natural light.

The expansiveness of that sunlight brought to mind a recent conversation with a friend, a long, calm talk about reality, or realities, about faith, or faiths, about rationalism and its discontents and inadequacies. “All I’m saying,” the friend had said, “is you can’t know. You can’t know either way.” As is the nature of such talks, it had been circuitous and inconclusive; but that day had been greyer than this, and something in its mundane flatness had mutely supported the assertion. Besides, he and Eric essentially agreed, in that both felt as if life specialized in indistinctness, until, every now and then, a stroke of near-clarity offered, fleetingly, a crisper picture, of a setting, an object, a person, a situation—but only one panel in an otherwise uncertain series.

In a corner a young woman sat deep in thought, focused entirely on the screen of her tablet computer. A few feet away, the animated waitress wrote by hand on a pad of paper, and another few feet away a cashier touched the screen of a computerized cash register. To Zach, even the sleekest contemporary equipment seemed far less elegant than a sleekly employed pen and paper, but then of course he usually imagined the hand of an artist, whose pen glides along the lines of his or her thoughts and summons a multitude of times and places to be dealt like cards, shuffled, flipped—played with, but in a way that transcends play. The desert, the sea, snowcapped mountaintops, the jungle—and the large rooms and elaborately odd cityscapes of science fiction—all these had been conjured with mere pen and paper. Such acts of prestidigitation appealed to an inchoate kindred force in him. Not that he considered himself an artist, exactly. He only thought like one: he had the eye but not the hand.

He had spent much of the morning in the prints and drawings gallery—at first glance, the most modest exhibition in the museum, for its works were of far smaller dimensions and, for the most part, less colorful than those in the painting and sculpture galleries, and did not reach out to the passer-by to demand attention. He felt he’d chosen to approach and study their details without being beckoned—and soon he had become transfixed by a vintage print, made from an etching, its 5 x 8 rectangle of existence composed entirely of black and pale grey, filled with sharp yet delicate lines; it depicted a hand and forearm, entering from the right, reaching to grasp a mysterious clothbound book lying on a table as, hovering in the background, a half-open eye bore silent witness to the scene. The wall label revealed the work’s title, Un homme énigmatique, and that it dated from late nineteenth-century France, perhaps inspired by a now-forgotten, or at least unidentified, literary composition; of the artist only an unfamiliar name and the absence of biographical details were offered, an excessive irony given the image’s title.

The shadowy triumvirate of hand, book, eye had the rough evasiveness of a wisp of wood smoke, distinct, even harsh, but ungraspable, and he did not want to reduce it with “understanding” but rather to set it whole into his subconscious as he imagined the artist had, perhaps, summoned it from his own. He stared, he wandered, he returned; and when he felt he had imbibed it as fully as he could, he walked away more definitively, though still in something of a trance. As he emerged from this he stood before a granite staircase, its steps in an ascending spiral, as if they might lead to the tower of a cathedral rather than the upper galleries of the museum; and because the clean pale granite evoked the relatively new rather than the ancient, it conveyed a sense of massive strength (the strength of the historical, the monumental) imported into the quotidian present. By contrast, he thought, highly polished oak—highly reflective and bright, as he had seen in another part of the museum, in a newer building attached to the one in which he now stood—would convey a subtler, more easygoing solidity; even one’s footfalls would resound differently, their character altered by the material of the staircase. He realized, to his satisfaction, that he was standing in a vast structure designed to stimulate these sorts of reflections, and that the outside world, all of it, could be seen as a structure capable of the same effect but on an infinitely vaster scale.

The waitress scurried by, and aromas of cafeteria entrées swirled past as if indicated by a cartoonist’s curling lines, but Zach had reached satiety. He took one last careful, deliberate look around, as if to memorize the line work with which his sibling humans had been drawn, and then he rose to exit, like a man carrying something valuable into the sunny day—but with the intention of sheltering it, perhaps to protect it from erasure.