About the Folio Club 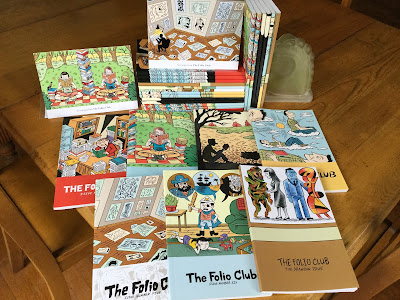 The Folio Club is an independent publishing project that began as a literary magazine founded in 2009 with a focus on short fiction and story-like essays, presented alongside indie comic art. Named for an unfinished satirical sketch by Edgar Allan Poe that depicted a zany, dysfunctional writer’s group, it featured a small handful of contributors on a recurring basis.

Excerpts from the Folio Club were showcased on the Paris Review blog, and in the course of its first seven issues the Folio Club print edition earned praise from New Yorker cartoonist Ivan Brunetti, Pilobolus choreographer Matt Kent, and the bibliophile bible Fine Books and Collections, among others, for its ability to combine underground influences, classic literary values, and indie comic art into a perfectly integrated whole.

In 2015 the Folio Club introduced Folio Club Books, an imprint name under which it publishes selected book projects.

“I look forward to each issue of the Folio Club. It is intelligent—smart and digestible—the selection feels eclectic but balanced and part of the same trip. There is always something that stays with me, to inspire, to ponder. I love it!” —Matt Kent, Pilobolus

Read about the creation of the Folio Club in an early interview with founding editor Robert Pranzatelli for the literary website Molossus, and a slightly later interview for Fine Books and Collections, the magazine for book lovers and collectors.

Pictured: Folio Club issues one through seven. Covers by Onsmith. Click the image for a closer look.

New comments are not allowed.