A Day in New York 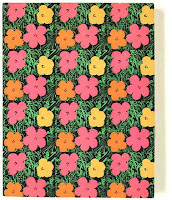 This week marks the 25th anniversary of the film Maurice, which was released in the U.S. on September 18, 1987 (three days earlier in the U.K.). I’ve already written—in the context of an earlier consideration of E. M. Forster—of my high regard for the vastly underrated Forster novel of which this film is a faithful adaptation. It’s difficult now to believe that the movie, which holds up splendidly, is already a quarter-century old, and even more difficult to believe that Forster composed the novel a century ago, in 1913-14. (He made important revisions to the manuscript decades later, in both the thirties and the fifties, before leaving it to its posthumous 1971 publication.) A website called “Cinema Queer” features an excellent review essay about the film, with a number of stills. Though posted a few years ago, the essay is still relevant. Be forewarned, however: like many articles about this book and movie, it gives away the ending. I read the book before I saw the film, and I began reading with no idea how the story might end. From the first page I thoroughly enjoyed it, but as I neared the final chapter it seemed to me impossible that Forster could resolve the plot in a way that would satisfy me. Ah, but he did—I won’t reveal how—and though the ending may not be to every reader’s taste, I regarded it (and still do) as brave, thrilling, and magnificent. 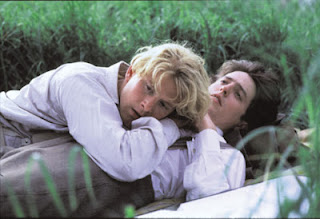 P.S. The film’s 2002 “Criterion Collection” two-disc DVD release contains a number of genuinely interesting extras, including deleted scenes and short documentaries. I particularly enjoyed the interview clips in which actors James Wilby, Hugh Grant, and Rupert Graves—the three charming and talented straight boys cast in this very gay drama—recall with pleasure the making of the film.
on September 18, 2012 No comments: 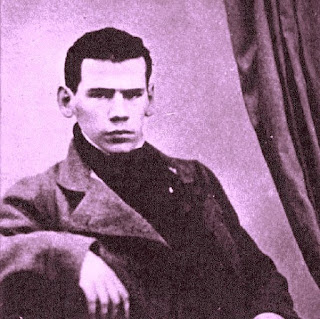 Today is Tolstoy’s birthday. I like this description of him given by Professor Nabokov in Lectures on Russian Literature:

Count Leo (in Russian Lev or Lyov) Tolstoy (1828-1910) was a robust man with a restless soul, who all his life was torn between his sensual temperament and his supersensitive conscience. His appetites constantly led him astray from the quiet country road that the ascetic in him craved to follow as passionately as the rake in him craved for the city pleasures of the flesh. In his youth, the rake had a better chance and took it. Later, after his marriage in 1862, Tolstoy found temporary peace in family life, divided between the wise management of his fortune—he had rich lands in the Volga region—and the writing of his best prose.

Tolstoy’s miracle, as has often been observed, is the sense of life, of lived reality, that permeates his best work, especially Anna Karenina. Open that enormous novel to any page and start reading and you will instantly feel you are in the midst of the characters’ lives, as life is lived daily, in motion—both outward and inward motion. This lifelikeness or “actuality” (as Lionel Trilling called it) has been attributed to various causes: Trilling credited Tolstoy’s moral vision and affection for his characters, Nabokov pointed to Tolstoy’s handling of time. James Wood has focused on “the physicality of Tolstoy’s details”—brought to the fore in Richard Pevear and Larissa Volokhonsky’s translation of Anna Karenina, which Wood praised in the New Yorker in 2001. As he points out, Tolstoy “is not interested in telling us what things look like to him [emphasis added], and he is not interested in telling us what else they resemble. This is why he eschews simile and metaphor at these moments of physical description.” I particularly like Wood’s observation that Tolstoy’s descriptive details portray signs of wear on everyday objects, reflecting their ongoing use and, by extension, the lived day-to-day reality of which they are a part. Furniture, clothing, other household possessions, as well as the objects in the world beyond the home, are all seen in an ongoing state of existence, whether new or used or aged—and here we cross paths again with Nabokov’s consideration of time as a key element; and, as time means for humans a progression toward death, we recall Trilling’s view that it is Tolstoy’s humane feeling for his characters, his moral vision, that is the crux of the matter. The three factors intertwine; the rooms have been lived in and are being lived in; the book is being lived in; and as we read it we enter and live in it too, to a greater extent than with any other author. 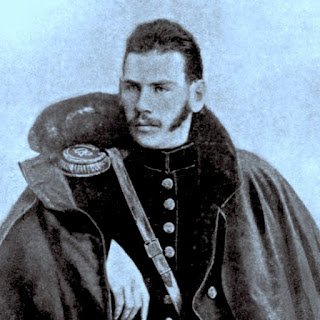 Here’s a little “art appreciation” exercise with three images by the great Jean Giraud, a.k.a. Moebius. Look closely at the first two to note the differences, not only due to the change from black-and-white to color but also the subtle alterations to the drawing itself. And then compare to the third image which represents a sequential movement. (Click images to enlarge.) 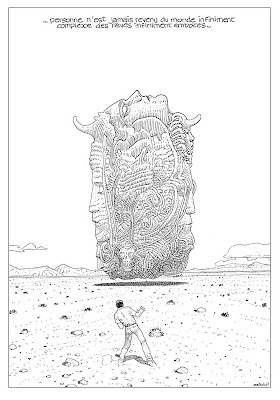 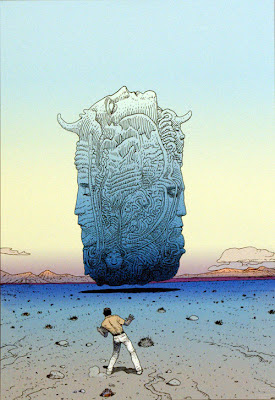 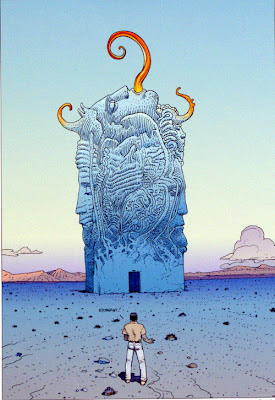 The black-and-white image is from Moebius’s 2008 graphic novel Chasseur déprime (literally Depressed Hunter, but also a play on the term chasseur de prix, bounty hunter). The color images were created for two limited edition digigraphie prints based on the book and sold through the official Moebius website. (Images: Jean “Moebius” Giraud.)
on September 03, 2012 No comments: 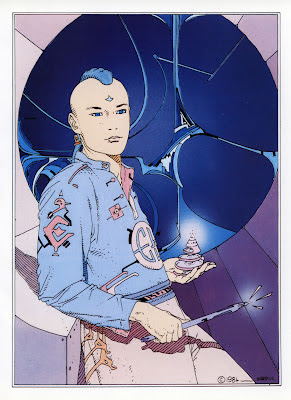 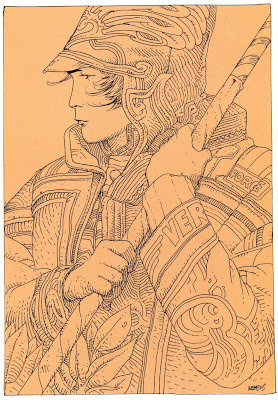 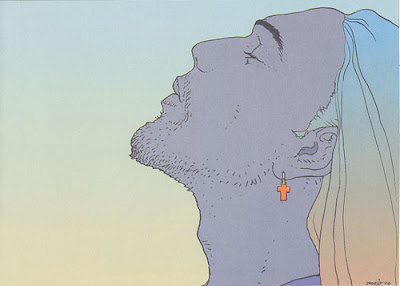 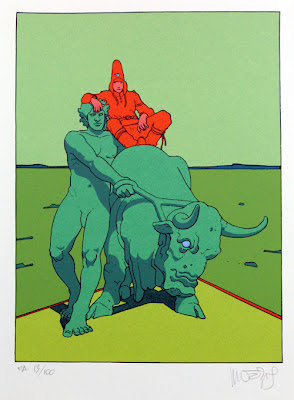 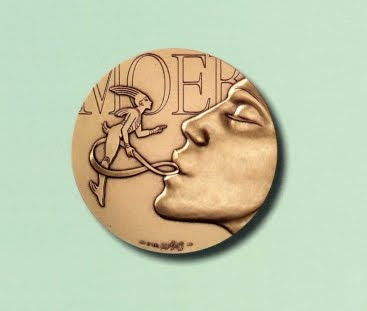 “I love her strange whirling rhythms,” Truman Capote once said of Virginia Woolf. He claimed not to like her novels—“But I love her criticism and I love her diary.” While I don’t share Capote’s aversion to the novels, among which I would single out To the Lighthouse as Woolf’s masterpiece, I do find those three words “strange whirling rhythms” marvelously apt. For whether in fiction or nonfiction, Woolf’s prose has its own pleasurable, not to say captivating, cadences; the strange whirl of her complex yet always pellucid sentences derives not only from the musicality of her diction and syntax but also from the strange whirl of the ideas beneath the surface, which the prose precisely reflects. “Strange” because the author relentlessly found fresh new angles of approach to her material, which was life, its consciousness and the consciousness of it; “whirling” because in her narrative and rhetorical strategies for both fiction and nonfiction she never stood still, never proceeded in predictable linearity, always whirled in an improbable circle around her subject, within her subject, bringing into the whirl seemingly disparate peripheral subjects, and then, in perfect rhythm, landed with an artful smack onto the dead-center of the target one hadn’t realized she had been after all along, its essence illuminated by her unconventional sweep as it could never otherwise have been. Yes, I too love her strange whirling rhythms.

I appreciate, too, a term that Virginia Woolf used as a genre category: “life-writing”—a useful label for a broad array of work. Woolf applied the term loosely, to biographies, to memoirs and autobiographical essays, and to letters and diaries; and, not surprisingly given her identity as an innovator, the term is suited to a merging of such forms, and seems to imply spontaneity as well. “Life-writing”: direct, intimate attempts at capturing life, and capturing it alive.

This valiant woman, beleaguered by severe mental health crises, once wrote in her diary: “But I will use all my art to keep my head sane.” Part of her greatness stems from her insistent ability to prize and chronicle those moments when, most alive to the reality of beauty, she could revel in the union of language and life, in, for example, a phrase jotted in a journal entry: “A lovely soaring summer day this; winter sent howling home to his arctic.” Or another: “The world swinging round again and bringing its green and blue close to one’s eyes.”

“Art is being rid of all preaching: things in themselves: the sentence in itself beautiful: multitudinous seas…” How perfect, how appealing; yet in place of the “preaching” there are of course silent selections of values, choices; and even when she did wish to “preach” (I’m thinking here of A Room of One’s Own, that most gorgeous lecture-argument), she could make rhetorical magnificence—in a word, art—of the entire proceedings, and finish with four paragraphs (“and please attend, for the peroration is beginning”) that hold a place of honor among my favorite passages in literature.

It wasn’t Virginia Woolf but Colette who said: “Be happy. It’s one way of being wise.” —but Woolf did her best, in regard to both happiness and wisdom, despite ghastly obstacles stacked against her. Literature provided a lifeline again and again. Through her voluminous writings her inspirations are thoroughly documented, her love of English poetry and of Shakespeare and of biographies and histories—and then there is this:

My great adventure is really Proust. … I am in a state of amazement; as if a miracle were being done before my eyes. How, at last, has someone solidified what has always escaped—and made it too into this beautiful and perfectly enduring substance? One has to put the book down and gasp. The pleasure becomes physical—like sun and wine and grapes and perfect serenity and intense vitality combined.

They were kindred spirits in several ways. She hailed in Proust “his combination of the utmost sensibility with the utmost tenacity. He searches out these butterfly shades to the last grain. He is as tough as catgut and as evanescent as a butterfly’s bloom.” In these sentences she might as well have been describing her own best efforts. Yet her sensibility, her strategies, her preoccupations and special lyricism, remain entirely her own.

Contemporary editions of her books sometimes quote, on their back covers, a few words of tribute from her friend E. M. Forster: “She pushed the light of the English language a little further against darkness.” In the essay from which that phrase is taken, Forster also noted, in the very same sentence, that “she gave acute pleasure in new ways”—all of which I mention because it’s easy to forget that art at its best is both a remarkable pleasure and a heroic act; in the midst of its wit, insight, and delectability it almost inevitably advances the energies of the truly human.

Virginia Woolf’s birthday is January 25—this Wednesday. I recommend you curl up with at least a few paragraphs of her strange whirling rhythms today or sometime this week.