On Nabokov’s Definition of Art 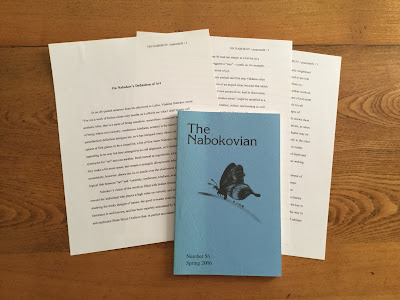 In an oft-quoted sentence from his afterword to Lolita, Vladimir Nabokov wrote: “For me a work of fiction exists only insofar as it affords me what I shall bluntly call aesthetic bliss, that is a sense of being somehow, somewhere, connected with other states of being where art (curiosity, tenderness, kindness, ecstasy) is the norm.” That last, parenthetical definition intrigues me, as it has intrigued many others; its four nouns appear at first glance to be a casual list, a list of four states Nabokov cherished, each appealing in its way but here arranged in an odd alignment, as if meant to be read as synonyms for “art” and one another. Read instead as ingredients, a kind of recipe for art, they make a bit more sense, but remain a strangely idiosyncratic selection. This eccentricity, however, draws one in, to puzzle over the elusiveness of a more solid, logical link between “art” and “curiosity, tenderness, kindness, ecstasy.”

Nabokov’s vision of the world as filled with hidden treasures, surprises waiting to reward the individual who places a high value on curiosity and exploration (the naturalist studying the tricky designs of nature, the good re-reader studying the tricky designs of literature) is well known, and has been superbly articulated by his foremost biographer and explicator Brian Boyd. I believe that, in perfect accordance with such a vision, “curiosity, tenderness, kindness, ecstasy” may be read not simply as a list but as a sequence, four stages in a process, one that suggests a “way”—a path, as, for example, Buddhism is a path—that is for Nabokov the secret of joy.

Curiosity is the prerequisite, the necessary prelude and first step. Oddness often piques it, as the oddness of Nabokov’s description of art piqued mine, because that which is odd or different may reveal new information or new perspectives, lead to discoveries, serve as a catalyst for growth. The old saying “opposites attract” might be modified to a more accurate “otherness attracts”—in matters of intellect, culture, and learning as well as in love. Tenderness and kindness follow, and they are not identical: although both words can mean gentleness, “tenderness” suggests a fond emotional or intellectual caress, whereas “kindness” suggests a deliberate act of compassion. If we find, in our curiosity, that we are drawn to a person or thing that inspires feelings of tenderness, we react with kindness. Just as friendship leads one to behave with greater sympathy and tolerance toward the friend than one might toward a total stranger, a fondness for a particular author, book, or idea leads one to devote greater time, care, and attention to the object of interest; and here, taken to an enviable extreme, the devotion of the passionate student may segue into a series of ascending steps, noble and invigorating. Climbed well, these steps can lead to a state of grace, even if only a fleeting one; a sense of having touched or entered a higher realm of feeling and being, a rapturous or divine moment: ecstasy. I imagine this “ecstasy” as comparable to, or compatible with, the Greek enthousiasmos, which traces back etymologically to roots that literally mean “to be in God” (and lead to the Greek word enthousiazein—“to be inspired”—before evolving into enthousiasmos and our own “enthusiasm”).

In his best works, Nabokov’s prose, marked by an extraordinarily heightened cross-referencing of details, wordplay, and hidden patterns, and designed to provide infinite rewards for re-reading (or should I say “provide rewards for infinite re-reading”?), serves as an elaborately prepared field of practice, and an endless workout, for readers interested in this “way.” Nabokov’s ideal reader is an amalgam of polymath detective, doting lover, wise constructor, and intellectual-sensualist, likely to yell “Eureka!” on the way to euphoria. Such an explorer canvases the landscapes of Nabokov’s “unreal estate” with pleasure, to coordinate the fictional details strewn there and coo over the myriad insights and intrigues that arise from sly combinations, as when a peculiar set of particulars implies that a character who died in an early chapter may be exerting a subtle spectral influence in a later one, as a ghost invisible not only to the other characters but also to the uninitiated, casual, or first-time reader. The good re-reader discovers that in a Nabokov work, and in life, reality reveals further layers of depth and complexity in direct proportion to one’s willingness, one’s efforts, to continue seeking them—ecstatically.

But, of course, to describe this as a “path” or “way” demands the placement of tongue in cheek, for Nabokov, the passionate individualist, could abide no groups, movements, or schools of thought. Consider it, then, a lesson from an ingenious professor, distilled into four nouns and placed, quietly, between parentheses—a literary aside, given as a mere clue to his priorities, which only incidentally doubles as the key to a mode of thinking and living that might entirely transform one’s vision, point the way to an ongoing process of revelation and inspiration, and lead to an endless series of sublime delights.

Copyright 2006 by Robert Pranzatelli. All rights reserved. Originally published in the scholarly journal The Nabokovian.

I like very much this author photo from Vladimir Nabokov’s later years, showing him soaked by a sudden rainstorm, delighted. I know that for some, his mischievous, playful spirit is often overshadowed, if not altogether eclipsed, by his intimidating intellectual prowess, recondite allusions, and (mis)perceived arrogance. Consider, however, that face, the face of a man who brandished a net to capture fluttering things; and place it alongside this, from biographer Brian Boyd’s introduction to Nabokov’s Butterflies:


His love of Lepidoptera drew upon and further sharpened his love of the particular and the habits of detailed observation that gave him such fictional command over the physical world—biologically (birds, flowers, trees), geographically (localities, landscapes, ecologies), socially (manorial Russia, boardinghouse Berlin, motel America), and bodily (gesture, anatomy, sensation). He thought that only the ridiculously unobservant could be pessimists in a world as full of surprising specificity as ours, and he arranged his own art accordingly.

My brief essay on Nabokov’s tantalizing definition of art as “curiosity, tenderness, kindness, ecstasy” offers an indication of why Nabokov’s smile reflects such a genuine, knowing sort of joy.