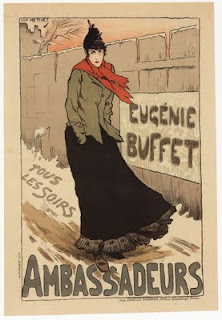 The forthcoming issue of The Folio Club (issue number four) will include a brief essay of mine entitled “Paris” which begins as follows:


For many years I’ve kept a framed poster of a French lithograph by Luc Métivet, a contemporary of Toulouse-Lautrec, on the wall of my apartment. It has followed me from one apartment to the next for nearly three decades...

Although I do not specify the image or discuss Métivet further in my “Paris” essay, I want to do so here. The framed reproduction to which I refer is of his most famous work (above), an 1893 poster advertising a performance by Eugénie Buffet at Ambassadeurs. It’s a well-known image, readily available from countless retailers of inexpensive, mass-produced posters and prints, often alongside the most frequently reproduced Toulouse-Lautrec posters. I happened upon it the same way I imagine many others do: as a newly arrived college freshman, sorting through stacks of posters being sold on-campus to students eager to decorate their dorm room walls. But unlike all the other posters that passed through my life in those years, this one stayed with me, it had a subtle pleasant power, my father and brother framed it for me in a light wooden frame that suited it perfectly, and it became a sort of companion.

I knew nothing at all about the artist of this beloved work, and for many years my curiosity remained quietly in place, merely a mild sense that I was in the presence of a pleasant mystery. Whenever I made a slight effort to learn more, I learned only of the existence of this one poster; but now, within the past twenty-four hours, I’ve discovered that the multiple reasons for my longstanding failure include a comically simple one: although he signed his most famous image “Luc Métivet” he is more often listed (and discussed) under the longer form of his name “Lucien Métivet” or the even longer, full version: Lucien Marie François Métivet. Armed with this information and the miracles of the Google search engine, I have uncovered a few scraps of biographical data and a number of images. 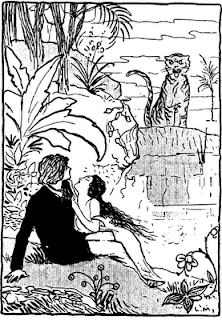 He is identified as a “French illustrator, painter, graphic artist” who lived from 1863 to 1930 or 1932. The year of his death is apparently a matter of conjecture; one online source concludes that “the last years of his life were marked by obscurity and the date of his death is not known.” His main working years, however, were graced with a creative spark: he was “a highly successful poster artist and contributor to Parisian humor magazines like Le Rire and La Semaine de Suzette.”

Le Rire (“the laugh” or “laughter”) was a popular satirical weekly founded in Paris by Felix Juven in 1894, and published from October 1894 all the way into the 1950s. From the beginning it featured many of the leading poster artists of the period, including Toulouse-Lautrec (who contributed numerous drawings during its first three years), Métivet, and other figures now recognized by collectors of Belle Époque illustration, such as Faivre, Forain, Hermann-Paul, Jossot, Léandre, Roedel, Roubille, Steinlen, Vallotton, and Willette.


a master in caricature, humorous illustration and lithographic techniques. After his debut exhibition with the Salon des Artistes Francais, he published a series of satirical drawings in the Critique. He soon abandoned that style in favour of poster art and became one of the most prominent illustrators of the 19th century. He became one of the leading illustrators of Le Rire, and in 1926 he illustrated the humorous tales of Balzac. “At the Sculpture Exhibition” is a hilarious image that Métivet did for the cover of Le Rire; it appeared in May 1896, during the publication’s second year. In its audacity and satirical delight this drawing exemplifies for me the kind of humorous illustration that must have inspired future generations of cartoonists. Here a high-society lady peers at a statue of a male nude. The image is funny enough on its own, but the caption makes the implications even naughtier: “–Tiens! mon ancien cocher!” (“Hey! My former coachman!”) I see a visual echo down the decades, if a rather genteel one, in the famous debut cover of the New Yorker, from 1925, with its iconic dandy peering through his monocle at a butterfly.

Other Métivet works I’ve found online include two versions of a second poster for Eugénie Buffet (in a different appearance, Concert de la Cigale), a series of comparatively less polished illustrations that can be seen on Wikimedia Commons, and this interesting cartoon (“Marianne 1920”) that Métivet drew in celebration of the 50th anniversary of the French republic in 1920: 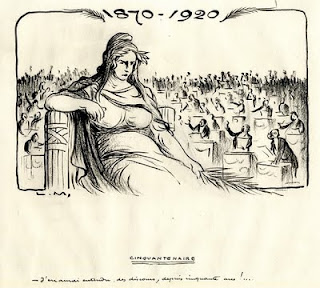 (The caption translates as “I've heard a lot of speeches in 50 years,” a phrase intended as the words of the disillusioned Marianne, i.e. the Republic.)

I’m delighted to finally know more about Monsieur Métivet after all these years, and to discover that the creator of the “fine art” poster that has remained the centerpiece of my home décor for so long was, in fact, a cartoonist. How exactly “one of the most prominent illustrators of the 19th century” all but eluded my detection and remained obscure to me for decades I can’t quite fathom, and perhaps this proves that I myself would be an excellent subject for a cover of Le Rire: the dotty fellow with magnifying glass seeking a subject hiding in plain sight. I only wish I could summon Luc Métivet here, alive and well, to draw it; or, failing that, I’d like to find an appropriately located portal in time, to slip through just briefly, so that I could at least thank him and shake his hand.

You can learn more about Métivet from my two subsequent essays about him for the Paris Review, related to his comic take on fashion and his World War One drawings (with slideshow). An abundant selection of additional images can be found on this Tumblr devoted to his work.