The Triumph of Comedy 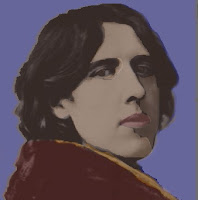 As my friend The Bunburyist pointed out earlier this month, Oscar Wilde’s story “Lord Arthur Savile’s Crime” has been happily revived in a new stage adaptation in Washington D.C. The comic tale on which the show is based is an old favorite of mine, from the bygone days (my twenties) when I used to read Wilde frequently and with great enthusiasm. Even his lesser works are often full of dubious but daring ideas, and reading the most engaging of them is like passing through a golden door into a golden room, to discover that its occupants and owner possess golden tongues.

When I think of Wilde, I often think of Chapter Three of The Picture of Dorian Gray, a delicious luncheon at which the epigrams are sharper than the cutlery. Alongside its ping-pong match of witty one-liners, the description of Lord Henry’s conversational games sounds like a portrait, analysis, and critique of Wilde’s own gifts as raconteur: “The praise of folly, as he went on, soared into a philosophy, and Philosophy herself became young, and catching the mad music of Pleasure . . . Facts fled before her like frightened forest things.”

Overall, The Picture of Dorian Gray—unlike Wilde’s masterpiece The Importance of Being Earnest, with its flawless orchestration of interconnected epigrams and brilliant comic premises—is extremely uneven; its quality seesaws throughout, interest sustained mainly by the sensibility (of decadence, transgressive sexuality, and amoral aestheticism) with which Wilde teases both the reader and society. Its one-liners even fall prey, at times, to the common tendency, rare in Wilde, to mistake tart negativity for wit (cf. Dorothy Parker, Quentin Crisp). “Lord Arthur Savile’s Crime” is far more unified and consistent, a thoroughgoing delight, but most of Wilde’s writing has an uneven quality—both an uneven quality and a mysterious way of transcending the unevenness.

The stories, fairy tales, plays, and essays (the latter sometimes in dialogue form) all mix wit, provocation, and drama in varying degrees. The continuing fascination of their implications and ambiguities has been increased, more than a little, by the world’s continuing fascination with their author, and all his implications and ambiguities. Perhaps if his life had taken a different, happier turn, Wilde might have eventually dramatized his various prose works himself, but as it is, no one can blame him for not writing more, or for failing to further perfect his body of work: Victorian England, history, and hateful human prejudice must be held responsible for that loss. What remains is his strange and original writing, marked by its abundance of audacity and ingenuity and its lasting ability to amuse. It’s a rare martyr whose legacy is to leave future generations not weeping for his tragedy but laughing at his comedy. Yet in an ongoing paradox that Wilde himself would have relished, that is his achievement: an irresistible, perpetual triumph.
on March 21, 2010 No comments: