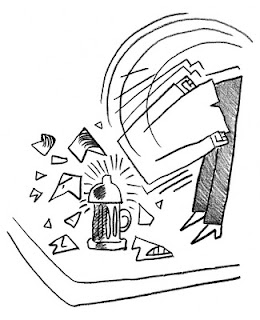 Folio Club cover artist Onsmith has a penchant for head games. I don’t mean that he’s a manipulative person—on the contrary, he’s forthright, conscientious, and likable. It’s just that he does alarming things to the subjects of his drawings: their heads tend to explode, evaporate, shatter, or split; or their facial features melt, mutate, fall off, or simply consist of things that, um, don’t belong on a face. At least this is the vision to be found in the Onsmith drawings contained in the first issue of The Folio Club. One can’t help but conclude that to be trapped inside them would be rather… disconcerting. For those of us lucky enough to be on the outside looking in, however, this artist’s cheerful grotesqueries can be oddly exhilarating.

Above, a drawing by Onsmith; below, wraparound cover of Onsmith’s limited edition Claptrap No. 2. The cover is a two-color screenprint with rubber stamps printed on the inside. 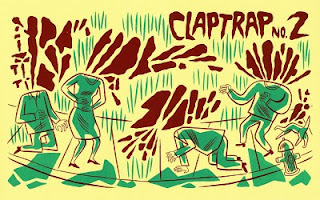